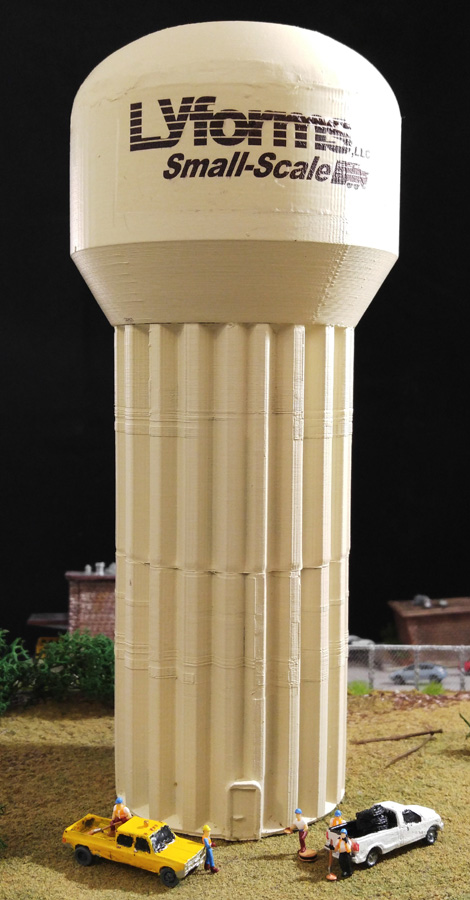 SK019, the water tower with the fluted column is one of my favorite so far in the Lyforms Small-Scale catalog. The idea for this kit had been in my head for quite a while before I started Lyforms and I always planned on it being one of the first to be printed.

There were several other water tower kits available in the marketplace for n scale. Most of them are multi-column elevated tank styles that have been around since early 1900's. Walthers offers a modern era pedesphere style tower. But that is it! Not many options!

It's funny because the fluted column is such a prevalent style in life scale. They are commonly found in towns all over the USA. I don't know why no one has brought one to the marketplace. It would fit in with any layout designed out of at least the 1970's to present day.

I originally designed it on a flight from San Francisco to Washington, DC on my iPad. I then put the design on my laptop and set out to dissect it into pieces. My first attempt cut the columns into quarters. After a test print, i determined that quarters wasn't necessary. Breaking the column into halves would work just find.

The first tank design had a larger diameter than SK019. It was based on scale measurements of water tower dimensions of similar design that I found online. I broke it into three pieces just like the current design. After I printed it, I put the pieces together without gluing next to some other n scale buildings that I had already built. It looked huge! It dominated the attention. I determined that while it was accurate scale-wise, it wasn't practical for an n scale layout.

I reduced the diameter of the tank and while i was at it, I changed the angle of the tank bottom to be less than 55 degrees so that it didn't require scaffolding when printed. I also did the same with the circumference of the tank top. You will notice that since the center of the top will have some remnants of scaffolding on the underside because it is essentially flat at that point.

After printing the smaller tank, I knew that we had a winner! It has attracted interest at all of the shows that I have attended. The flutes along the columns really catch the light and shadows well to really make it pop. The maintenance door adds subtle detail that creates more realism. And it's simple design with only four pieces makes it easy to assemble.

All in all, it was a very enjoyable and satisfying experience to design and make this kit. If you haven't looked at it in the Kits section, please check it out. Hopefully it can find it's way onto your layout!