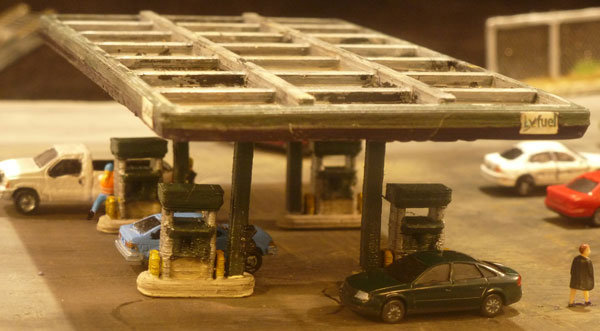 Gas stations and railroads seem to go well with each other. It's not uncommon to see a gas station next to a set of railroad tracks. I remember once seeing a diesel locomotive stop on a lightly used line and then some engineers descend out of the cab to walk over to a store to pick up some snacks.

The first gas pump kit that I designed, SK017, is the most contemporary era. I modeled it after pumps that we would see today with digital screens, keypads, and a single hose. The pumps rest on top of concrete islands with barriers on each end to protect them.

Overhead is a flat canopy to protect your n sized citizens from the elements. When designing the canopy, I located gas stations near me on Google Maps and zoomed in on them to see what they looked like from above. I discovered that most of them consisted of a grid work of support beams from which the canopy cover hangs. The canopy was designed to model this look.

On the underside of the canopy, you will notice a series of grooves that run parallel to the short ends. These were added to prevent the canopy from warping by pulling against itself as it cooled during the printing process. Since "real" humans won't be able to see that side when it ends up on a layout, I figured that it wouldn't impact the look. It also lends itself well to adding LED lights should one feel so inclined!

One other detail that I'm especially fond of are the two window washing reservoirs mounted on the canopy poles next to the gas pumps. Again, hardly anyone will see them, but I wanted to add them because, well, I could!

As I mentioned earlier, I plan on going back in time and designing gas pumps from past eras before gas stations commonly had the canopies and tv screens, so be on the watch for those in the future.

If you haven't seen them yet, please go check out the photos in the Kits section of the SK017 kit. Hopefully they can find a way to your layout!